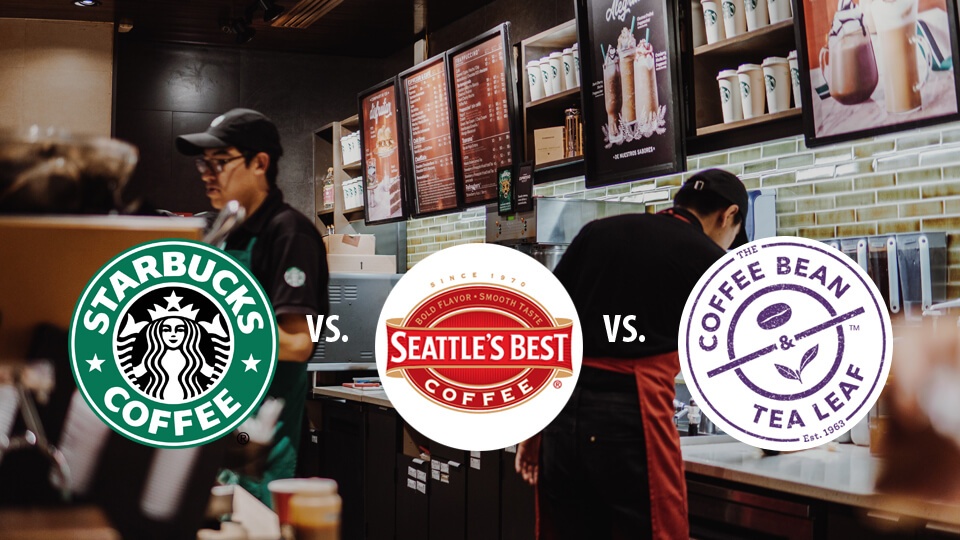 When you crave for coffee, there are three coffee restaurants that can be considered the best coffee shop people go to. Whether you are going to work, relaxing or just hanging out with friends, unless you’re supporting local, these 3 go-to best coffee shops are:

These places are among the three best coffee shop houses that revolutionized consumer-grade coffee. Their coffee changed the way people drink coffee forever.

Even then, how do their drinks compare? Which one is the best?

Let’s find out as we review Starbucks vs The Coffee Bean and Tea Leaf vs Seattle’s Best Coffee. Who has the best coffee? Let’s have a sip:

Largest market share among the 3 coffee shops in the list and widely considered as the best coffee shop in the world.

Starbucks is one of the best commercial coffeehouses in the world hands down. Established in 1971 by two teachers and a writer. They started the business after witnessing coffee expert Alfred Peet’s roasting style. 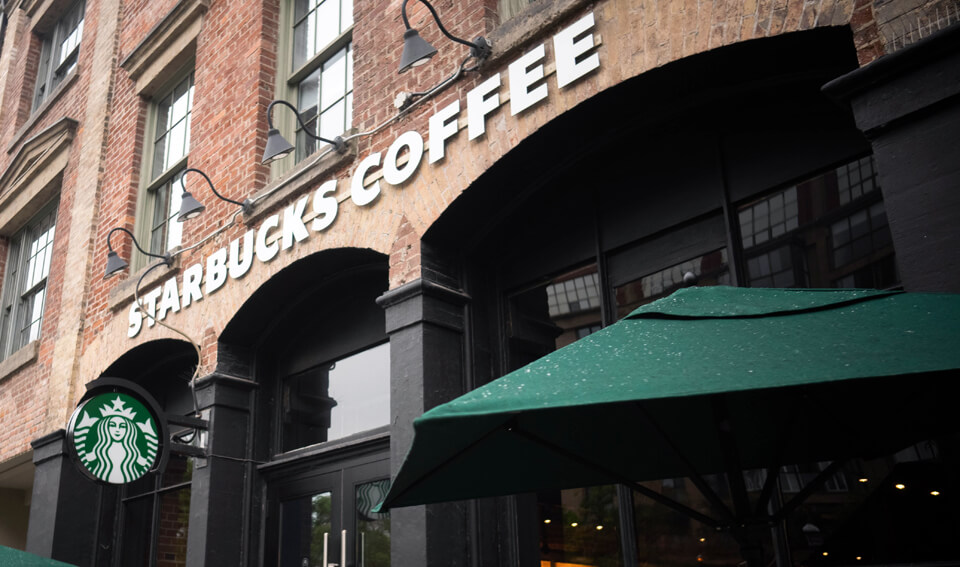 From then on, the growth of Starbucks is explosive. It now has a net revenue $24.72 billion in 2018 and growing more and more. What makes this Seattle coffeehouse one of the best in the world?

First, Starbucks is careful when it comes to sourcing its coffee beans. They only use arabica coffee beans from different parts of the world. Their main sources for their beans include:

Starbucks started a fair trade coffee movement, helping how they source coffee. Many of their coffee blends in their shops are Latin American and Asia/Pacific blends. Some of the roasts they sell have the source country on the label too.

How Does Starbucks Coffee Taste?

Much like their reputation, Starbucks has great coffee because of its bean sources. For example, their Komodo Dragon blend is earthy and herbal, with the mild scent of petrichor. This dark roast is great for people who like mild acidity and a full body mouthfeel.

On the opposite side of the scale, their Willow Blend is a combination. The Latin American and East African blends create a super acidic, light-bodied coffee. It’s lemony due to its African origins, but still has a crisp finish that embodies Latin American blends.

Starbucks gets much flak due to its heavy use of cream and sugar in its more popular coffee drinks. Even then, if you focus more on their traditional coffee, you’ll see how good their variety is.

One of the first to be considered the Best coffee shop in Seattle.

Next in the list of the most popular coffee chains is Seattle’s Best Coffee. While the brand is now a subsidiary of Starbucks, it’s still one of the best coffeehouses in the US. Its distinctive taste coming from a tried and tested coffee source and brewing methods.

Seattle’s Best started as the Wet Whisker coffee shop in Coupeville on Whidbey Island, Seattle. This was in 1969, spearheaded by founder Jim Stewart. By 1970, they opened the Stewart Brothers Wet Whisker on Seattle’s Waterfront Pier 70.

As the years went by, they opened up in various areas, including the historic Pike Place Market. By 1991, they renamed the business “Seattle’s Best Coffee”. This came after winning a local competition and started franchising in 1998.

Much like the other two coffeehouses, Seattle’s Best uses 100% arabica coffee beans. Their source, however, only comes from Latin America. They do so to keep their flavor profiles consistent with every cup.

Seattle’s Best Coffee has a price point more in line with the working class. Their coffee, though not as haughty as Starbucks, is still delicious. Their blend is easy to the palate and is great from start to finish.

One of their strongest blends is the Portside Blend, which was the original Level 5 dark roast. This blend is rich and intense with almost zero acidity, making it a bold choice. It has a nutty flavor with dark chocolate notes, which is a great blend for dark coffee fanatics.

On the other side, their Breakfast Blend is citrusy, with a crisp mouthfeel and mild flavor. This coffee is quite acidic and will jolt you up in the morning. If you like it light in the morning, this is the choice for you.

Now owned by a Filipino Food Corporation and arguably the best coffee shop in the Philippines.

Completing the triumvirate among the more popular restaurant coffee available in the market is The Coffee Bean and Tea Leaf. It is one of the smaller but more popular coffee shops out there.

This American coffee chain began way back in 1963 but were recently purchased by the Jollibee Foods Corporation. As the years came by, they discovered better coffee quality. They then started importing top-quality coffee rather than office blends.

Even through the change of ownership, The Coffee Bean and Tea Leaf is a great coffeehouse. While it sells different coffee and tea drinks, its coffee is still one of the more superior choices.

The Coffee Bean claims to use only the top 1% arabica coffee from different sources. This includes East Africa, Latin America, and the Pacific. This includes countries like:

They roast up to 7 million pounds of coffee beans, coming from their handpicked choices. Their arabica blends come from up to 6000 ft (2000 m). They even hand roast their selections in their Camarillo, California roasting facility.

How Does CBTL Coffee Taste?

The Coffee Bean and Tea Leaf has 6 distinct types of coffee roasts. Each have their own distinct flavor profiles.

For example, their Jamaican Blue Mountain has a good body with a clean, mild taste. It has a spicy that gives a solid balance of flavor.

Another great coffee is the Guatemala Antigua, which is a medium roast, full-bodied coffee. It is one of their higher-quality coffee beans, with a good balance of flavor and aroma. It is acidic and has a sparkling finish, great with sweet treats.

When you go to their stores, you will taste a nice, delicious cup of coffee every time. The Coffee Bean and Tea Leaf experience is a treat for anyone who loves a quality cup of joe.

Popular restaurant coffee runs a good chunk of the coffee world for a reason. Their machinery and financial might keep their coffee not only great but consistent too. If you like easy coffee, these businesses are a solid choice.

If you’re into supporting small farms and delicious, tribal coffee, you’ll love our own blend. You’ll love Bean To Mug.

Bean To Mug provides fair trade organic coffee that comes from tribal mountains in the Philippines. Choose from our delicious arabica or tasty robusta coffee and help Filipino coffee farmers with every bean.

Taste the difference of delicious ethical coffee with every cup. 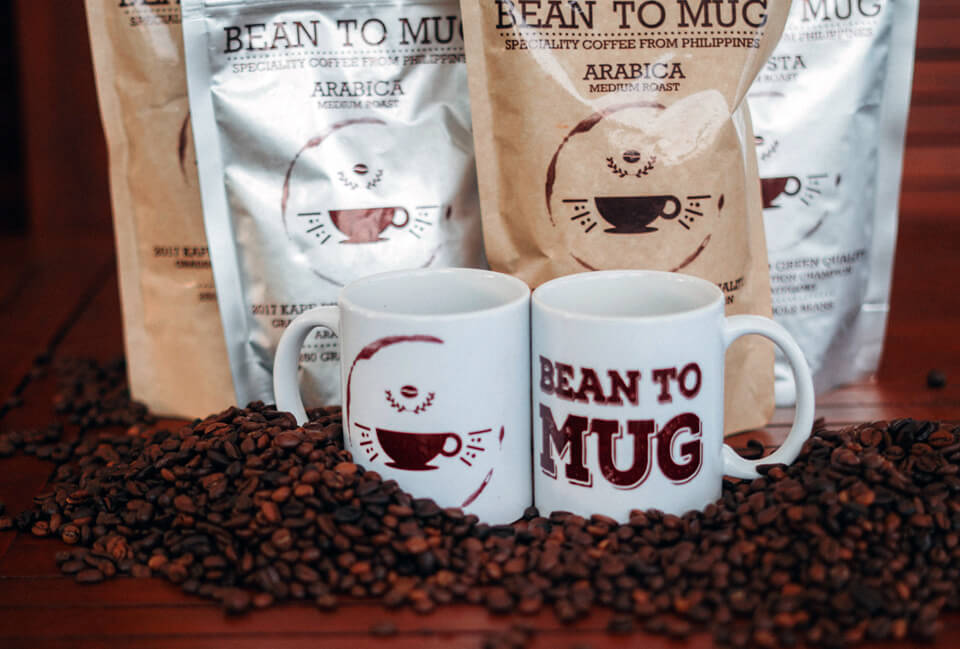 Bean to Mug Organic Whole Bean Coffee is imported directly from the exotic rain forests of Bukidnon the heart of Mindanao a southern island of the Philippines. 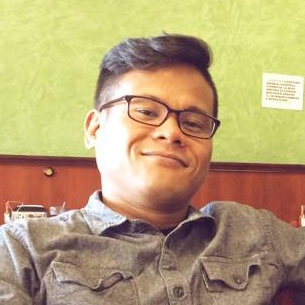